Caricaturist Martin Fengel: “I like finding the lightness in the world.”

Martin Fengel is a German photographer and artist. His illustrations and photographs regularly appear in well-established newspapers and magazines such as the Süddeutsche Zeitung, ZEITmagazin and Vice. For us, he was in charge of drawing the Phil caricature. In our interview, he talks about the charm of light-hearted joking. Not everything has to be perfectly smoothed-off and prim – it can also be funny and likeable. Without losing meaning in the process.

You are a trained photographer, but you are currently also working as a graphic designer, illustrator and filmmaker.

Nowadays it’s pretty easy to work with various media. I always enjoyed drawing alongside photography and at some point I took the step from static to moving images. With modern programmes such as iMovie it is really no longer a problem at all, as long as you’re not a complete idiot. I have fun with it, but it’s not something with which I would ever have earned money. In any case, it’s rarely about that in my job.

So what is it about?

Making the world a more beautiful place. Bringing people joy. Doing what I think is right. Leaving my mark. I received this God-given talent and I have to make use of it somehow. At first, this scared me, but now I recognize that I can bring joy to many people with my work. And that’s something wonderful, in my opinion.

Where does this affinity towards images come from?

It probably has something to do with my parents. Even as a child, they brought me along to lots of museums. I also used to love reading Jules Verne and the books had illustrations for each chapter, which I really enjoyed even back then. This was the first time I saw the connection between that which is written and that which is drawn. Images are a different medium of communication than words and have always fascinated me as such. With a drawing, one can express something other than what is possible with photography, while a film, on the other hand, can convey things that a drawing cannot. Although I do write from time to time, it simply brings me pleasure to think in images.

I’m interested in what the world looks like. And it looks different today than it used to. For example, I think about how funny the drawings in the Munich streetcar used to be and how ugly these figures look today. Nowadays, they have to please everybody. Back then, they were jolly, fat ladies that had bought too much shopping and had to hold on tight. And now it’s people who always look decent. A lot has become stuffy and conventional.

That’s why I love it when clients like PhilsPlace approach me and ask me to draw comical figures with character. The inspiration for the Phil caricature came from the architect Karl Schwanzer, a moustache-sporting gentleman. Phil is a jovial, charming figure, designed to put you in a good mood just by looking at him. That’s my idea of a pleasant and likeable approach – especially in today’s day and age, in which often all that matters is cool perfectionism and self-optimization.

How do you get the ideas for your themes? What is your inspiration?

I read a lot and frequently visit museums. I’m interested in what other artists are doing. You always have to remain curious. Once you stop being curious, what’s the point of living? But on the other hand, you cannot just assume that your way is the only right way. I do doubt myself a great deal, but in a constructive way. I also get bored pretty quickly. This is why I collaborate with a lot of young people – because I like exchanging experiences with those who think differently. I’m constantly trying to do something new. You definitely have to give new things a chance. But when I look at what cars used to look like, they really look quite boring today in comparison. The spectrum has dwindled down to a homogenized taste. It’s really not necessary to repeat what everybody is already doing anyway. Today, we live in a time that is very similar to the 50s. A lot of things look interesting, but are quite boring when it comes to content. It’s the charm and the heart that are lacking. That’s definitely different here in Austria as compared to Munich, where I live. But I’m an FC Bayern fan, so I don’t have a choice. So I make the most of it.

Caricatures have often aroused controversy in the past. Has this happened to you, too?

Yes, of course. Caricatures are supposed to be comical and over the top. For me, it’s more appealing and interesting when they don’t look like what we’re already familiar with in reality. I think that’s the most boring thing you can do.

Have you ever had second thoughts with any caricatures? Are there any you would like to take back?

No, I think everything I do is relatively harmless. I usually work for clients. It’s interesting to move within a predefined framework. Of course I’ve created a few controversial drawings, too – I believe it’s funny as long as nobody gets hurt. For me, it wouldn’t be worth it to put my life at risk in Turkey for an Erdogan caricature. It’s certainly sad that it’s so dangerous in some parts of the world. Fortunately, here we have the freedom of being able to make Merkel a little chubbier or draw Jesus with a boner. I don’t know why I would want to do that. But nonetheless, it’s nice to know that you wouldn’t be sent to jail for doing so.

Myself. I don’t think it’s a big deal when people make jokes about me. I can also have a laugh about us Germans. It’s okay for me that people call us “Piefke” here. When I come across Germans on holiday and they’re wearing white tennis socks with sandals, it really does look terrible. It’s perfectly fine to make fun of that. Or when they take their own mustard on holiday because they can’t get it on Mallorca. I don’t think it’s bad to laugh about that. In turn, we make different jokes about Italians or Turks – without immediately being judged for doing so. The moment people start talking to each other and cracking jokes, they start to get along. I think that’s a charming way to approach people. I would find it sad if people were to stop making jokes about me.

I also like to watch The Simpsons. And there are funny artists too. Kippenberger, Thomas Bernhard, Ulrich Seidl – Austria has a high quality of humor in general, although I’m not necessarily referring to André Heller here. I do like finding the lightness in the world, making fun of one another and not taking everything too seriously. Sometimes you say “Good morning” and people look at you as if you had said “You’ve got the word shit written on your forehead”. I simply do not know why people are so tense sometimes. I grew up in a world in which you joke around from time to time – a world in which people are playful with one another, and not so bitter and serious. I like to laugh. But it also makes me happy when it’s raining, I’m lying in bed, and I don’t have to go outside.

What do you see for the future of caricature? Especially in light of new reading habits?

The print media industry is going to go down the drain, I believe. It will maybe last another 10 years, and then it will no longer exist. But I think it’s actually really nice to have something tactile to hold in your hands. I appreciate it when content consists of more than just fast facts – when you actually dive in a little deeper instead of just consuming snippets.

Is this maybe also the reason why most of the art world is largely concerned with the surface matters and seldom goes into depth? 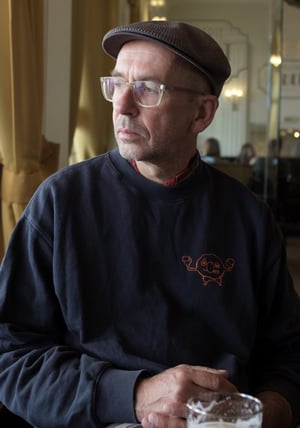 Maybe. A little snippet of information on your smartphone doesn’t require a lot of comprehension. Naturally, that’s convenient. I thought that the development of technology would also be accompanied by an intellectual development – that we would become smarter. But that’s not the case. I do think that in some areas we were further along than we are today. For example, when you look at the PhilsPlace building, which was constructed in the 70s – nobody builds like that any more today. It’s the same with cars today. Nowadays, they look like they’ve been designed for degenerated baby adults. Everything has round edges and can’t have more than three buttons, just in case anyone has to think too much. Because it might get too complicated. And I think this is a real shame, because knowledge is also something beautiful. Or addressing a topic in depth. Sometimes it can be good when things are easy to understand, but too often, things have simply become dull.